New and selected poems of faith and doubt

Witty and reflective poems of faith and doubt, ranging from the Tree of the Knowledge of Good and Evil in the Garden of Eden to the events of the first Easter, taking in on the way Julian of Norwich’s hazelnut, Mastermind, God as a blizzard, and the eighth deadly sin.

The subject matter of Richard Skinner’s poetry starts with the Tree of the Knowledge of Good and Evil in the Garden of Eden and concludes with the events of the first Easter, taking in on the way Julian of Norwich’s hazelnut, Mastermind, God as a blizzard, and the eighth deadly sin. A psalm based on the New Testament and a modern take on Epiphany are included, along with a dozen new ‘Invocations’. Both witty and reflective, the poems will appeal to a wide range of readers.

Colliding with God,
and wearing no seat-belt,
he suffered extensive injuries
to his life.
They say he is not the same man
since the accident.

God, too, did not escape unscathed,
but received nasty wounds
to his hands and feet,
and a deep laceration in his side.
His condition is said to be critical,
and a full recovery
is unlikely.

Neither party
is covered by insurance.

A Londoner by upbringing, Richard moved to Devon in 1975 to write a novel which remains as unpublishable now as it was then. Several collections of his poetry have, however, been published, including Invocations (WGP 2005). A former member of Cambridge University Footlights, he also occasionally writes and performs sketch-based comedy; and in recent years he has enjoyed a collaboration with composer Nigel Walsh, being the lyricist for their musical Bethlehem!, several liturgical pieces, and a number of songs. He and his wife are members of the Anglican parish of Central Exeter. 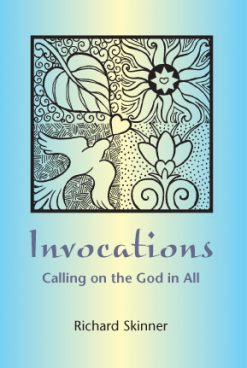 From earthworms to CD-ROMs, from starfish to blizzards, from electrons to garden forks, from doubt to a shout of laughter - This beautiful little book of invocations inspired by creatures, conditions and objects in the world around us which reflect and are a metaphor for aspects of God or the Divine will resonate with individuals and groups of any or no particular religious or spiritual allegiance.