Into the Foothills of Transformation (Downloadable book)

A collection of Donald Eadie’s reflections, letters, prayers and poems relating to the letting go of his old life as a result of illness and becoming a pilgrim in the borderlands, the place of exploration and discovery.

Shortly after becoming Chairman of the Birmingham District of the Methodist Church, Donald Eadie was told that he had a degenerative disc disease. Following three major spinal operations, he was forced to retire, and to face the letting go of identity and role, feelings of marginalisation and abandonment – living with the death of the old life, and not being able to imagine a new one with meaning and purpose.

Jesuit priest and writer Gerard Hughes accompanied Donald during this time. ‘The borderlands are the place of exploration and discovery. They are the new centre,’ he said. And paradoxically, in time, Donald began to experience the move away from the centre of a busy life to the edge as a journey deeper into the heart of things.

‘There will be new companions,’ another wise old friend promised. And to Donald’s great surprise and joy this has been true.

Much of Donald’s time is now lived in ‘a loved room’, visited by people who are also pilgrims within the borderlands.

Into the Foothills of Transformation is a collection of Donald’s reflections and journal writings, and letters, prayers and poems.

Some comments on Into the Foothills of Transformation

‘May we never lose sight of the possibility of transformation’, says one of our prayers in the Iona Community Members Prayer Book. It goes on to suggest the wonder of being ‘continually surprised by people who believe in one another’.

Donald Eadie believes in people and has never ceased exploring the wonder of transformation, in himself and in others. He is a man who knows that listening and caring, whether as husband, father, grandfather, son, brother, friend or minister, whether with those nearby or far away, means involvement, commitment, compassion and risk … and it costs. For his willingness to take risks, share his life and meet the cost, I, along with many others worldwide, will always be grateful.

A book by Donald is a rare and beautiful thing to be treasured. In Into the Foothills of Transformation he has gathered together this caring and conversation in poems, letters, stories, prayers, journal pieces – his own and others. His accessible, inspiring, challenging, intensely moving words are real and come from the heart. They reveal a depth of thought that emerges from life restricted now but not overwhelmed, from a spirit forever free. Donald takes us through pain, frustration, anger, sorrow and joy to the foothills; to somewhere we don’t know and are just beginning to understand: a place of vision and imagination. Our journey has changed us. The wonder and the surprise will be with us for the rest of our lives

I have known Donald since the 1980s when I was a minister in a large rural circuit in Herefordshire, then part of the Birmingham Methodist District. Donald was appointed as Chair of that District in 1985. It was during the 1990s, after we had moved to the north-west, that we learned of his illness – a degenerative disease of the spine which eventually led to his early retirement from full-time ministry. I renewed acquaintance with Donald and Kerstin when I moved to Lichfield following the death of my wife, Joan, in 2004. By that time Donald had discovered in the darkness of disablement and chronic pain, a ministry of listening through which a growing number of people have found healing and hope. He has challenged the church to recognise the ministry of those living with handicaps, both physical and mental, enabling their voice to be heard. Personally I have benefitted much from his deep insight, wise counsel and been blessed and inspired by his lived witness to the transformation in adversity of which he has written honestly and profoundly in his latest book. It is a privilege to commend it.

Today is Passion Sunday. I have just heard on the radio that one in five people in the developed world suffer from chronic pain. What Donald does in this book is to connect these realities. He goes, taking us with him, into dark and unsettling places; places of pain and grief, places we don’t like and find hard to accept. He provides us with, not answers but, a drawing back of the veil onto unknowing. His journey is not the expected one of moving from darkness into light. He moves in the opposite direction: from known to unknown, going deeper into the darkness, deeper into this world, perhaps your world, from which most recoil (including, often, the Church). In the process he offers signposts that might make such a journey transformative.

Be warned! This book tears off the bandages revealing the way pain wounds, exhausts, isolates, excludes and limits. With fearless honesty Donald offers us his own story and a varied collection of narratives, encounters and experiences that provide opportunities for tearful recognition and connection with our own pain, and the pain borne by the world. Then he invites us, gently, to hear what pain is saying to us of our common humanity and limited often broken bodies; to live with the questions that pain creates; to embrace our wounds, and even to find them reflected in the wounds of Christ. This is not an easy read! But by the end you are left in no doubt that, for Donald, pain in its many forms, whilst awful, can become a doorway into interconnectedness, hospitality and love. Given his subject matter Donald’s hope in the possibility of such transformation is both astounding and inspiring.

Donald Eadie’s newest book reads like a tapestry. Each page, each chapter tells a story of transformation, threaded with texture and colour and crucially rooted in the real lives of those marginalised through pain, disability or prejudice. Donald’s ability to transform pain into promise, and to hold tenderly the fear and pain of others sings through each page of this remarkable book. I first met Donald in 1996 as we began a journey together of exploration into ecumenical spirituality. Our paths have crossed occasionally since then. What I know deeply from my own and others’ encounters with him is that he has a sharp and gentle ability to intersect with the lives of others at the point of need, with clarity, wisdom and healing. A true spiritual companion. Speaking out of a chair, out of a life of pain and limited ability, Donald empowers others around him. He has a remarkable ability to alight on the spiritual quality of each experience. Donald’s gentle voice sings through this volume. I am so grateful to him for his generous sharing.

This book digs into the depths of what it is to be human. I am a
mother and adopted adult. Naturally I was drawn to Donald’s personal
adoption journey where despite the differences in our stories I
share an understanding of some of the hope and hurt that envelops
this experience. I do however find myself identifying with so much
more. The reflections, quotes, stories and the uncurling of thoughts
has welcomed me into a world that is both familiar and new. I am
someone who doesn’t have a particular faith but find this resonates
in a way that I hadn’t anticipated. The story feels universal. It
invites the reader in with openness and without judgement which is
wonderfully refreshing.

Downloading your file
After your payment has gone through, you will receive an email with a link to click in order to download your book.
If you don’t receive this email, please let us know (admin@ionabooks.com). Remember to look in your junk folder if you have one, as it might have ended up in there. 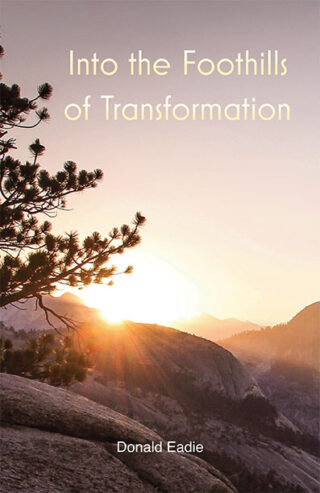 Into the Foothills of Transformation

A collection of Donald Eadie's reflections, letters, prayers and poems relating to the letting go of his old life as a result of illness and becoming a pilgrim in the borderlands, the place of exploration and discovery.