The hymns of Leith Fisher

22 hymns (words & music), exploring themes not easily found in the standard repertoire, by Leith Fisher, who was a minister and a member of the Iona Community. Special book plus e-book deal.

22 hymns (words & music), exploring themes not easily found in the standard repertoire, by Leith Fisher, who was a minister and a member of the Iona Community.

Buy the book and e-book together and pay only £2 for the e-book (instead of £5.10). PDF version only, to allow for printout of the songs for ease of use. The discount will show up in your shopping basket.

If ever a book was written about Leith Fisher’s life, it would need numerous chapters to cover his many gifts, interests and life experiences. Leith was a parish minister in the Church of Scotland in Glasgow and Falkirk, a member of the Iona Community, a broadcaster, contributing to BBC’s Thought for The Day; he served on presbytery committees, and was Convener of the General Assembly’s Panel on Worship. He was a gifted speaker (and also a gifted listener) and his pastoral abilities were legendary. In a tribute to him following his death in 2009 Leith was described as ‘one of the ablest ministers of his generation’.

For all his activity, Leith was also at his desk, sometimes late into the night, writing poems, articles, reports, life-changing letters, gospel commentaries, prayers – and hymns.

Seven of these were included in the fourth edition of the Church Hymnary (2005), and hymns like ‘For your generous providing’ and ‘Christ is our light’ are now established in the song of the church.

At his death Leith left a number of unpublished songs and hymns, the best of which editor Douglas Galbraith has had the privilege of bringing together here, with Leith’s pieces from CH4, in this collection.

Like most good hymns, these started life in a local parish or situation, and explore themes not easily found in the standard repertoire. They are set not only to known hymn tunes but to traditional Scottish melodies, including from the Hebridean tradition, which was a much-loved part of the author’s musical landscape.

It is hoped that these songs will add to the quality and breadth of the praise and prayer of the church.

Douglas Galbraith has edited several publications, including Leap, My Soul, hymns from Africa gathered by Tom Colvin; Worship in the Wide Red Land; The Church of Scotland Year Book; the church music magazine Different Voices, and was on the editorial committees of Common Ground and the Church Hymnary (CH4). He is a retired minister of the Church of Scotland and of the Uniting Church in Australia, and is a member of the Iona Community. 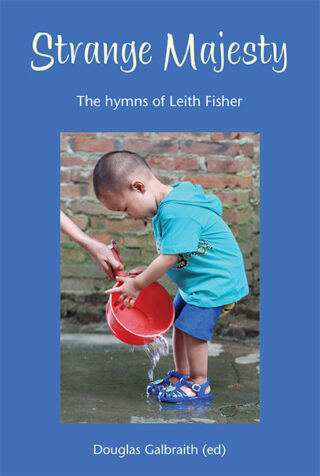 22 hymns (words & music), exploring themes not easily found in the standard repertoire, by Leith Fisher, who was a minister and a member of the Iona Community. Special book plus e-book deal.