Presents a method of using remembered (oral, not written) versions of the Bible with people of all ages and abilities, in which telling and interpreting the stories in light of the participants’ own lives become inextricably linked.

Word of Mouth presents a method of using remembered (oral, not written) versions of the Bible with people of all ages and abilities. It describes remembered Bible study sessions that the author has conducted and gives examples of the liturgy, stories and prayers that have grown out of them.

A closer look at the life of Jesus and the fullness of his humanity reveals that he was someone who spent his life with marginalised people, ‘on the edge’ of society. When a group of people remember his story together, they begin to recognise the connections between the gospel and the ordinary events of their daily lives. As a result, their own stories gradually emerge from silence. Telling the story and interpreting it become inextricably linked.

In her work of doing Bible studies without written Bibles, Janet Lees is practising a ‘world-shaking’ pedagogy rather than a ”world-maintaining’ one. It aims to disrupt deathly habits and patterns with new, life-giving ones, and in embracing a contextual theology it opens us up to recognising the God we meet every day.

Janet Lees is a speech therapist and an ordained minister of the United Reformed Church. She has been developing the remembered Bible method for several years through worship and training events both locally and around the UK.

The author says:
‘Remembering the Bible’ is not just fun or a way of making the Bible interesting. It is a way of doing Christian education that aims to challenge the very situations in which it is being remembered. In his literacy programme amongst Brazilian peasants, Paulo Freire set out an important educational method. According to his pedagogy it was no longer considered sufficient to educate ‘the poor’. Rather, the very aims of education itself were exposed and reassembled. People didn’t learn to read because what they read was not relevant to them. Literacy had become ‘an act of knowledge’ in which text and context were united in order to pose the simple, yet provocative, question: ‘What is the relation between literacy, liberation and learning?’ The key thing about community education for Freire was that learning to read in a way relevant to their circumstances could give people a means with which to challenge the oppressive situation that had kept them illiterate for so long. Others have said that this kind of Freirian pedagogy takes place whenever educators continue a dialogue between texts and contexts, providing similar opportunities to challenge and change unfair situations. The method of remembering the Bible that I have described is like this … the text was the Bible, while the context was life on the edge in urban Britain.

The other method I like to use is to expose the way the parables have been used (over-used and sanitised) by the church. This way we can hold a mirror up to the church in which it can see itself through the parable. Most parables have been allegorised to include interpretations of the main characters as God, Jesus, the church, the world, etc. Having looked at the first method, we can see that this is not what Jesus originally intended, but it has become common currency in the church. Jesus did not tell parables about ministry, hymn-singing, flower rotas, friendship. But often we have taken the sting out of the parable by recasting and re-emphasising these imposed, safer themes. But, rather than completely throw this out, we can use it to say, ‘This is the parable the church is expecting, but look at it in this mirror and see something else about yourselves.’

Digital download: A resource for Advent and Christmas especially for those working with young people or children in a school, community or church setting - but also full of lively prayers, sketches and ideas for anyone looking to break out of a rut by using 'the remembered Bible'. 31 pages. 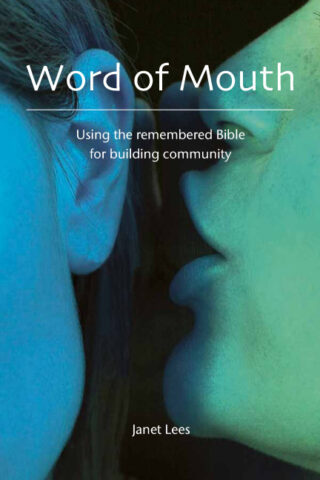 Presents a method of using remembered (oral, not written) versions of the Bible with people of all ages and abilities, in which telling and interpreting the stories in light of the participants' own lives become inextricably linked.